Testify about Video Evidence with Confidence

Prepare yourself for court with the best video evidence training and software available today.

Be Prepared with Video Evidence

Did you know that converting video files can lead to changes that can cause the evidence to be dismissed from court?

Did you know that investigators who simply press “play” with improper tools and training can inadvertently alter the appearance of suspect activity within a video?

These unintentional manipulations can be caused by popular tools including VLC, Windows Media Player, and even the proprietary players that manufacturers created to play the video for their own surveillance cameras. These fabrications can sometimes be subtle, but they can also cause egregious changes to the perception of “what occurred” within the video.

The Court recently tried a case around a Use of Force incident in Ottawa. An investigator recovered the surveillance video, played the files inside the proprietary player, and converted the video into a standard format. Unbeknownst to the investigator, his actions significantly changed the perception of force within the events, which lead to charges against a police officer.

His accidental manipulation of the video was shared with the pathologist, the media, and the prosecutor, leading to inaccurate opinions about what happened. The prosecution team leveraged the inaccurate video to portray the events, but thankfully the officer’s defense hired an expert who played the video accurately within iNPUT-ACE. The judge dismissed the inaccurate video and recognized that the iNPUT-ACE played video was an accurate representation.

iNPUT-ACE is built and maintained by a team of experienced forensic video analysts who know how to investigate video and testify in court. iNPUT-ACE plays countless proprietary video formats and can convert them accurately into court-ready MP4 files without changing a single pixel from the original data.

iNPUT-ACE provides a drag | drop | play interface for investigators to play back any source of video evidence. Behind-the-scenes, iNPUT-ACE extracts raw video using detailed forensic patterns that ensures every single frame of video is being played in it’s native format and quality.

Users can then quickly convert these proprietary files into standard MP4 formats that can be played in standard tools – all while maintaining the original frames in a verifiable and repeatable workflow. These converted files are a forensic copy, include validation “proofs,” and can be identified as “an original” that can be admitted as evidence in the court room.

The converted MP4 files from iNPUT-ACE can even be played in Windows Media Player, making it easy to admit evidence into court rooms that don’t have IT privileges to install software.

Many investigators and analysts bring iNPUT-ACE directly into the courtroom, and you can do the same!

The bottom line? Our solution enables you to make a stronger case in court.

For a real-life example of the importance of using video evidence correctly in court, check out episode 1 of Exhibit A on Netflix. Exhibit A is a true crime series that shows how innocent people have been convicted with dubious techniques and tools.

Learn more about the features that make iNPUT-ACE an ideal tool for the courtroom below:

Features That Enable You to Testify with Confidence

iNPUT-ACE provides the flexibility to convert proprietary video files to any number of lossless standard output formats that are easier to share, such as AVI or MP4. Unlike other conversion tools, iNPUT-ACE allows you to batch convert hundreds of files at once – saving an agency time and money. 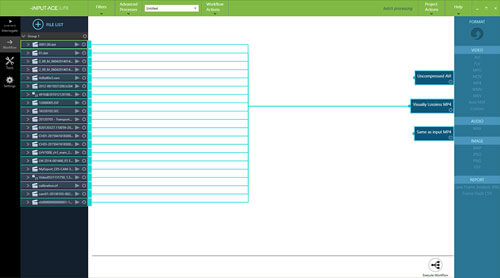 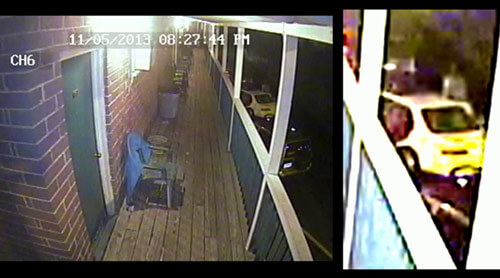 Investigators can create clips that highlight key moments in the video evidence and help explain what happened through a targeted sequences. Users can even bring iNPUT-ACE into the courtroom to play video full screen, zoom into relevant areas, and loop the content for the trier of fact while on the stand.

Need to share demonstratives with another investigator, analyst, or attorney? The powerful iNPUT-ACE Narrative Report tool is the most effective method for investigators to share their findings in a universal format.

Investigators can easily generate dynamic reports with auto embedded image and video files. All embedded video clips and images are self-contained within a single .PDF file, making it easy to share the reports without the need for specialized playback software.

When a suspect is visibly moving in and out of various camera views, investigators can quickly combine each of these observations into a single video file – allowing the viewer to track the suspects actions chronologically within a single clip. These “concatenated” clips provide the court with a thorough account of all the suspect’s actions from every camera view.

Wondering if your converted file matches the original? We can help! Through a combination of features such as metadata analysis, hexadecimal analysis, and hashing, iNPUT-ACE provides tools to ensure an investigator is prepared to testify accurately to all video evidence uncovered by the program.

Compressed video evidence is often misinterpreted due to limitations in compression technology. Within iNPUT-ACE video analysts can expose these limitations by visualizing the amount of compression in every area on an image, and by highlighting regions that may not be reliable.

Customers share their experience using iNPUT-ACE in and around the courtroom.

Fastest and Most Reliable

​“iNPUT-ACE performs flawlessly! The resulting video is so reliable, most defense attorneys simply stipulate to the video output. iNPUT-ACE is comprehensive and fast. With its simple drag, drop, and play functionality, I can now do so much more in far less time. It is the fastest and most reliable video processing tool I use.”

Works Well and is FAST

“I started using iNPUT-ACE after I saw a demo video. I loved that I could convert various types of proprietary video quickly. Our unit is ridiculously busy, always swamped with tasks, so we were happy to find a tool that works well and is FAST—it’s a fave!

Cannot Imagine Life Without It

“Over the past two years we have experienced an unprecedented increase in demand for our unit to be on-scene to collect and process evidence from DVRs/NVRs and cloud-based security camera storage. The change was putting a huge strain on our existing resources.

I have been pleasantly amazed by how much of a positive impact iNPUT-ACE has made – to ensure we were more efficient and effective in processing that footage – in spite of slowly sinking in a sea of CCTV footage! I am constantly impressed with just how fast I can achieve very complex procedures and produce an end-product for the investigative team. Similarly, just converting proprietary footage to a useable format is handled very successfully by iNPUT-ACE.

I cannot imagine my professional life without this product – it has been an absolute Godsend to me.”

Quality Training Enables you to Testify with Confidence

Did you know that 43% of Major Crimes Investigators who have testified in court about video evidence have less than 10 hours of training? Video is fraught with technical limitations, and those who have received more training can ensure the trier of fact is not misled through inappropriate playback.

iNPUT ACE offers more than 60 hours of professional training content. If you’re looking for a great place to start, check out our Video Literacy Course and start learning how to testify with greater confidence.

Ready To Testify about Video Evidence with Greater Confidence?